Which Super Bowl Ads Will Be the Best? Your Ultimate Cheat Sheet 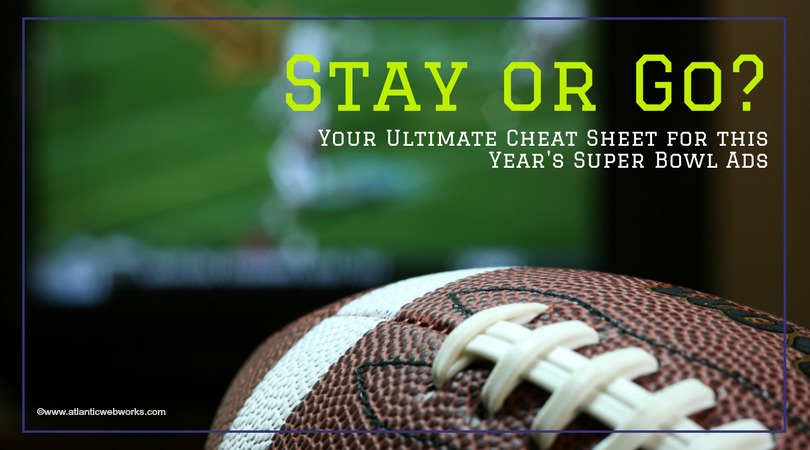 If you're not aware, I'm a huge, die-hard Dallas Cowboys fan and have been since before I was born (really—ask my dad... it's his fault). The 2016-2017 NFL season was pretty exciting for me and all the other Cowboy fans out there—reminiscent of the 1990s' glory days starring Troy Aikman, Emmitt Smith, and Michael Irving. It was a season so exciting that it even brought out scores of wannabe fans and converts. And then January 15 happened. The Cowboys' incredible season died like a bluebonnet in the Texas August heat. No more Super Bowl for us this year. Instead of cheering on our team like many other team fans, we're left with a decision to make. Do we partake in Sunday's big game viewing, opt to binge-watch The Crown or Mad Men on Netflix, or head to a friend's house to eat more calories in one evening than we typically get in a week—while watching the commercials.

Never one to miss a good party, I'm going for the third option.

This year's ad spots will, as they always do, feature plenty of well-known, famous Hollywood faces, and as many football stars will be in the commercials as there are on the field. Or at least it will seem that way.

Here are some interesting findings of this year's Super Bowl advertising:

Okay, enough pontificating from me... I know all you care about are the actual ads. I've done the hard work for you, watched all the ones that are already out either in the version that will run on Sunday or the teaser campaign leading up to the actual spot, and decided which ones are going to be the fan favorites and which ones I thought were just "meh." My favorite ads, as well as the most hyped ones, are listed first, and then a listing of all ads to run by category is at the end.

Basically, I'm giving you a cheat sheet on when you should stay tuned and when it's safe to go to the bathroom, grab a drink, or get another plate of food.

Budweiser: Born the Hard Way - Not just the self-proclaimed king of beers, but also the king of the Super Bowl ads. This year's ad from Budweiser is going to set some tongues wagging as its topic is the immigration of one of the founders, Adolphus Busch, to America. While Anheuser-Busch officially says the spot is not meant to have a political connotation, considering how hot that topic is right now in the media, one can speculate how much truth there is to that statement.

Bud Light: Between Friends - This year's Bud Light commercial is to promote their new tagline "Famous Amongst Friends," and all three of the 30-second spots will do just that: focus on the good times between friends. Bonus points to A-B for having "Sweet Child of Mine" as the background music.

Stay or Go Verdict: Meh. Stay for watching with your friends. Go if you're hungry.

Buffalo Wild Wings: "What The Favre‽" - There are three spots for BWW this year that feature former Green Bay Packer's QB, Brett Favre, and a couple of really pale, creepy, alien-looking dudes dressed in black. The first in the run is The Encounter, followed by The Marionette (posted below). My favorite of the three is watching Favre get twisted around like a string puppet; it's LOL worthy, and then the final one is The Conspiracy.

Febreze: Halftime Bathroom Break - Admit it... because you either don't want to miss the game, or you don't want to miss the ads, you wait for halftime to do your personal business. Febreze knows this, and they know that it's a huge flush (pun intended) on the sewer systems across the nation—all at one time. It's a humorous approach to a simple fact of life: everybody's gotta go at some point.

Stay or Go Verdict: Stay. Then go. The bathroom will be emptier then anyhow.

Intel: Brady Everyday - Intel is promoting their "360° Technology" with none other than football legend Tom Brady, QB for the Super Bowl-playing Patriots. Expect a little tongue-in-cheek poke at the NFL's controversial instant replay.

Mercedes: Easy Driver - Directed by the Coen Brothers (of Fargo and The Big Lebowski fame) and starring Hollywood legend Peter Fonda, this ad opens with a Sons of Anarchy-looking crew (albeit the much older Sons) staring at a jukebox (with the only song available being "Born to be Wild") who are suddenly summoned because someone has dared to block their bikes in. Turns out, it's the king of Hogs and open roads himself, Easy Rider Peter Fonda.

Mr. Clean: Cleaner of Your Dreams - This is Mr. Clean's first appearance at the Super Bowl, and it stars the newer, sexier Mr. Clean cleaning the house for a surprised housewife.

Skittles: Romance - Continuing with their bizarre ad spots (remember that freaky Steven Tyler ad from last year), this year's ad turns its attention to a budding romance between a young man and young lady as well as to all the other people in her house.

Snickers: Live - For the first time since 1981 (when Schlitz did a live beer taste test with Bud drinkers), there will be a commercial that is live. Other than the teasers that have been released and knowing that it stars Adam Driver, there is not much to go on, but given Snickers history of always delivering incredible commercials, it's bound to be epic.

Squarespace: Who is John Malkovich? - This one came in as my second favorite and stars John Malkovich who wants to start a website but discovers that the domain johnmalkovich.com has been taken. Expect a lot of reference to the film “Being John Malkovich.” Hilarious and pushing the envelope of SFW (Safe for Work)

Stay or Go Verdict: Sit your tail down and stay.

TurboTax: Humpty Dumpty - TurboTax does a great job with its commercials; this is a great example of making a boring topic like taxes entertaining. The premise here is that you can do your taxes anywhere. Personally, I prefer the Kathy Bates one better.

Wix: Big Game First Spot with Jason Statham & Gal Gadot - What happens when a bunch of bad guys causes chaos in your restaurant while you're busy building your website in the kitchen? If you're Chef Felix, you hope you've got a couple of fast-moving heroes in the front. While it's big on action and entertaining, I wasn't impressed.

Pepsi - Pepsi has three commercials labeled "for the Super Bowl," but one is really an ongoing countdown to the other big show of the night—the Pepsi Half Time Show with Lady GaGa. The other two are actually promoting Pepsi and Tostitos (a Pepsi product) and feature (more) NFL players. In Party Poopers, you have Ravens QB Joe Flacco reflecting on the times he was the party pooper and how Pepsi and Tostitos magically transformed him into a welcome and invited guest. Party Planner stars Broncos LB, Von Miller, as the ultimate party planner who is hired to plan the ultimate football party and redecorates the couple's house by replacing their living room carpet with astroturf and framed pictures by hanging cans of Pepsi. In my opinion, it's not Pepsi's best work but entertaining still.

Tide: Gronk's Discount Cleaners - This was my third favorite ad spot of them all. The expression on Jeffrey Tambor's face when Patriot's TE, Rob Gronkowski (who's not playing in Sunday's game), hands him his shirt is priceless. I watched the ad 3 times and laughed out loud each time.

Notable Mention - Wendy's: Cold Storage - The commercial is good, but what I love about it (as will my fellow digital marketers) is that it continues the absolute slaying of Twitter that Wendy's is currently doing with people who continue to troll them on social media and doubt that their meat is fresh, not frozen. Plus, having Foreigner as the background song doesn't hurt, either.

Stay or Go Verdict: Stay. Unless you're running to Wendy's.

There's your lineup of the most hyped commercials for the Super Bowl so far! I definitely want to hear on Monday which ones ended up being your favorites and if my "Stay or Go" cheat sheet helped!!

All the Super Bowl Ads: