10 Best Practices for Recording Video for Your Brand 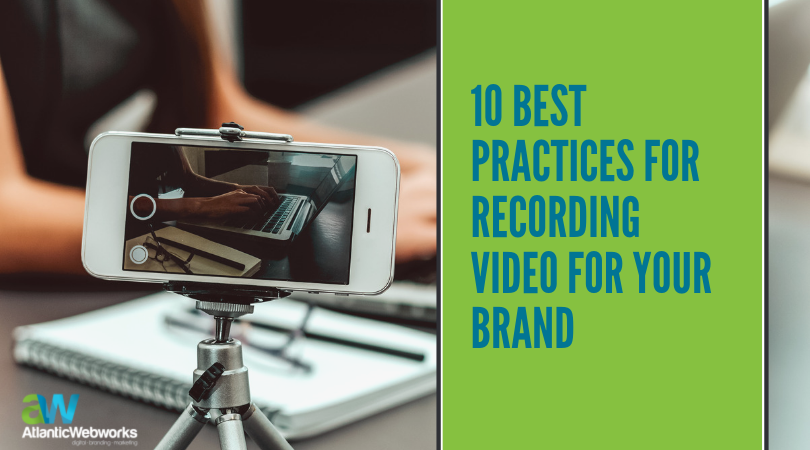 Video has continued to grow aggressively as a must-have component of  marketing strategy, and it is showing no signs of slowing down in 2019. According to HubSpot, "In 2017, it was found that 63% of businesses were using video as a marketing tool. By the start of 2018, that had risen to 81%. Now, at the beginning of  2019, the number has increased again to 87%." Many businesses put off creating videos for a variety of reasons, but we find the main one is because people think that it's overly difficult to do. But that is absolutely not the case! It does not have to become a big Hollywood production—in fact—the simpler it is, quite often, the better it is!

Over the next few articles, we're going to give you everything you need to finally get you started with shooting short and engaging videos to help market your brand! This article will give you the basic things you need to know such as proper lighting, recommended length, etc. From there, we'll follow up with what kind of equipment you need, and finally, we'll cover live streaming options!

One of the most important things about shooting video is having proper lighting. Ideally, natural lighting is best, but if shooting outside isn't a feasible option, then consider shooting in a room that has a window with natural light coming through it. If neither of these work for you, you'll need some type of artificial lighting that is NOT overhead florescent lighting in the office (no one looks good in those lights). We will cover different lighting options in the next post, but your options can range from a basic “ring” light to a complete light kit. Personally, I'm a big fan of the ring light for filming one person because it circles the subject's entire face, and there are no shadows to contend with.

You want the person(s) you're recording to seem as though they're looking the viewer in the eye. This means that you want the lens to be at eye level and that you are not shooting from too high up or from down below. If you're shooting yourself with an iPhone or Android, check to see which side of the phone has the camera lens and look directly at that. Too often, people forget which side the lens is on, and they are left with a video where the subject is looking "off camera." If you're shooting with a DSLR camera, then look directly into the lens.

A few years ago, shooting horizontally was the best standard practice as it produces a wide-format video that is the best for viewing on your computer. But with the majority of people watching videos on their phones, that is no longer always the case. As silly as it may seem, most people are not willing to turn their phones in order to watch a video in wide-format and will instead bypass the video—not exactly the result you're hoping to achieve! A new trend is to produce your video in a square format which can be easily done with editing software. Consider testing each of the three options, and let the numbers speak for themselves on which type of video your audience views the most and then move forward with future videos using that format!

The best viewed videos are usually the ones that are the most natural, so that would mean non-scripted. However, that doesn't mean you should trip and stumble through your recording. Even though I've been doing videos for years, at a minimum, I still write down bullet points of the points that I want to make. This does a few things: It ensures that I cover everything and it keeps me focused, on point, and less prone to rambling which cuts down on the number of times that I have to re-shoot the same video. You probably will want to use a script when you have a lot of information to get across that needs to be accurate or needs to have a more professional feel to it such as one that will reside on your corporate website. There are teleprompter apps you can download that will make this easier, but you'll need to set up your camera and the “teleprompter” in such a way that it's not so obvious that you're reading. Doing several run-throughs of the script will also help with this.

With rare exceptions should your video be more than two minutes long. The viewing public's attention span is getting shorter and shorter every day, and you only have about seven seconds to get them interested and keep them watching.  Additionally, each platform has limitations as to how long your videos can be. I've listed those limitations below, but please note that just because you CAN post a long video doesn't mean you SHOULD. It is better to film a tight video that gets the point across quickly than one that rambles on for what seems like forever. I recommend a setup similar to this one:

What do you want to accomplish with your video? Is it to showcase your company? Is it going to be a“how-to” for one of your products? There are so many different types of videos that you absolutely must know going in what the goal is because how you shoot it will be affected.

The old adage “people want to do business with people they like” rings true when it comes to videos for your brand. You want your video to be upbeat and engaging, so don't be afraid to be your most genuine self. This can even mean that the person who “should” be delivering the video may not actually be the best person for the job because if their energy level is low or if they're soft spoken or speak in a monotone, then that is how your video is going to come across.

You can upload your video to many places, and each place has different size and/or time limitations. Before social media platforms all allowed users to upload videos directly, you would have uploaded them to your YouTube channel, and then just used the link to promote your video. This is no longer the best way to do it—especially on Facebook—which, a couple of years ago, started taking YouTube on directly in competition for video traffic. In fact, your video will be seen less if you use a YouTube link than by uploading the video directly.  As I mentioned earlier, just because you can upload a long video doesn't mean you should. Below are the maximum size files on each platform.

A personal peeve of mine when I watch video is poor sound quality—especially because it's a cheap and easy fix if you just add an external microphone. Even if you're sitting right in front of the camera, if you're not using a microphone, the sound is going to bounce all over the place. Depending on what we shoot our videos with, we either use our wireless lavaliere microphone (my preference) or a desktop microphone a little off to the side. Even using your earbuds is a better option than nothing at all. Believe me, it will make a world of difference in the quality of your video and how long people will actually watch it. The slight concession I would make for this would be when you're doing a live feed, but even then you can use a microphone of some sort. 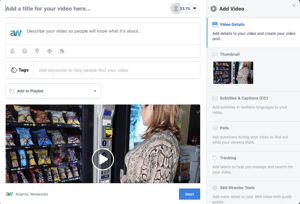 Finally we come to another post-production tip which is optimizing your video for search and the title of your clip. We've talked about how important blog titles are and video titles are no exception to that. It's important that your title not only be catchy but also include any keywords you want to rank for in the search engines. You'll also want to use appropriate tags on the different sites you're uploading to and a brief but concise description that tells viewers what they're going to be seeing (again using keywords). Adding appropriate hashtags is also a good practice to follow.

So there you have ten simple best practices to get you geared up and ready to add video to your marketing content! Check back next week for the items (both fancy and basic!) to actually shoot your videos!