Social Media Trends to Expect in 2018 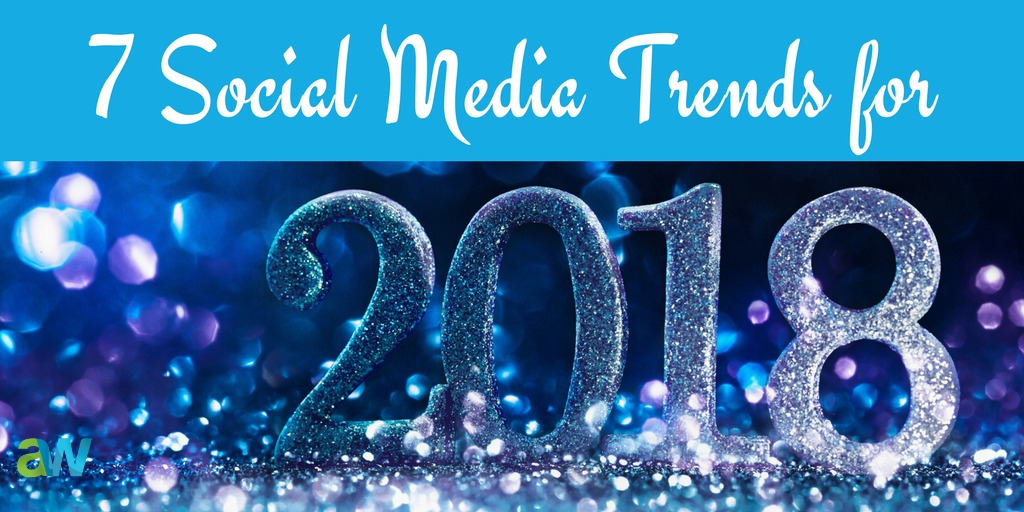 A brand new year means brand new predictions and goals—both personally and professionally. While we can't really help you drop those 10 pounds, exercise more, or finally get more organized (but we're cheering you on from here!), we can help you with what you can expect to see happen in the world of social media and digital marketing. So, without further ado, here are 7 things you can expect to see in 2018!

1. Augmented Reality - Remember when Google Glasses were introduced to the world several years ago? While they didn't catch on the way many thought they would (too early for their time perhaps?), the seed was planted. In layman's terms, augmented reality is bringing pieces of the digital world into the user's perceived real world. If you're on Snapchat, the dancing hotdog is a great example.

One of my favorite examples of augmented reality from last year came from 19 Crimes, which is a wine maker. They released an app that when you pointed it at the wine bottle, it seemingly came to life and the criminal on the label told their story. I shot a video at home to show how it worked:

Pretty neat, isn't it? While many small businesses may not be at that level, you can expect to see more brands doing things like this in their marketing approach.

2. Instagram Stories - This is definitely not new, but you will start seeing more Instagram Stories from influencers and brands. In the one year since they were launched, the number of views surpassed Snapchat which for marketers is a good thing since it is still a challenge to truly guage the ROI of using Snapchat to reach your audience, not to mention extremely expensive. With Instagram, you already have an audience built, and add the fact that it IS owned by the Big Daddy of social media, Facebook, and I say this is a win for small businesses, and one that you can easily adopt this year!

3. Hello Gen Z - We've heard so much the past few years about marketing to the Millennials that it may seem odd that they're old news. Well, they're not REALLY old news, but their little brothers and sisters are now the focus. Gen Z are the children of Gen X (although some say born to Boomers, but I disagree) and were born between the years of 1995-2014. What makes this group special and one that you should pay attention to? They have never, ever lived without a digital connection. Even the early Millennials remember the days before they had a device or computer at their disposal. Not Gen Z. And thus, they are very used to engaging with brands and celebrities which also means you're going to have to do a lot to get their attention with all the noise in their world. But if you can get their attention and their loyalty, you'll also get their money and they have quite a bit of it.

4. Live Streaming/Live Video - If there was one thing you heard me talk about last year it was "video." Quite simply, people love to watch video, and as the technology in our phones continues to get better and better, it lowers the entry point for those willing to just push "record." There are so many different ways to incorporate video into your marketing startegy, and it doesn't have to be anything fancy. As a matter of fact, the more “real” your vidoes are, the more people are going to want to watch them. I wrote a lot about video marketing last year—check out these two to get you started: what kind of videos you can create and getting started with video marketing. If you were reluctant or just didn't get around to it, make 2018 the year you finally embrace video.

5. Influencer Marketing - I recently moderated a panel for small business owners on the impact that influencers can have on their businesses, and judging from the questions we got, there are a lot of you who are interested in knowing more about how influencer marketing works. In a nutshell, working with influencers can put your company or product in front of an audience that you more than likely wouldn't have easy access to. Sure, you could pay to reach them, but your message will never be as genuine and trusted (sorry, it's true) as when it comes from someone whose followers trust them and rely on them to give their honest opinions on products and services. You don't have to have a huge budget to get started, believe me, but if you have a product or service and want to reach a new audience, try to carve out some money this year and give it a shot—the ROI on an influencer campaign is around 11 times greater than some of the other marketing methods.

6. Message Platforms/Chatbots - This approach has been used for a long while now overseas and is just recently becoming significant in the states, and the reason is something I mentioned in #3: Gen Z and Millennials. Neither of these groups are fond of being marketed to via email or other traditional methods. I have three daughters in the Gen Z category, and I have to remind them to check their emails at least on a weekly basis (I know they'll never do it daily, so I compromised with once a week) because “that's how the old folks communicate.” Ouch! That hurts doesn't it? If you use the Facebook Messenger app on your phone, you've probably already noticed brands adding this approach to get their ads and sponsored content to you. You've also probably already noticed pages that have the chatbot enabled on their Facebook pages—which you also have the ability to do now!

7. Organic Reach is Dead - Okay, maybe it's not dead but it's pretty close as it relates to social media. It's been stated that in 2018, the organic reach (meaning your content will show up on user's Facebook walls) will be a paltry 2%. How do you combat that? With money. I've been saying this for a few years now, and it's finally reached that point: in order for you to get the consumer's eyeballs on your content, you're going to have to designate a budget for boosted posts and ads. It's also been noted that Facebook is running out of ad space, so using a/b testing when you do run ads will prove to be even more critical. This does not mean to give up on your social media campaigns, just that you're going to have to create better content (video!) and put some ad dollars behind it.

I hope this gives you some key insight as to what to expect moving into 2018. Which trends are you most excited about? Will you try and implement any of them into your strategy? I would love to hear your plans!