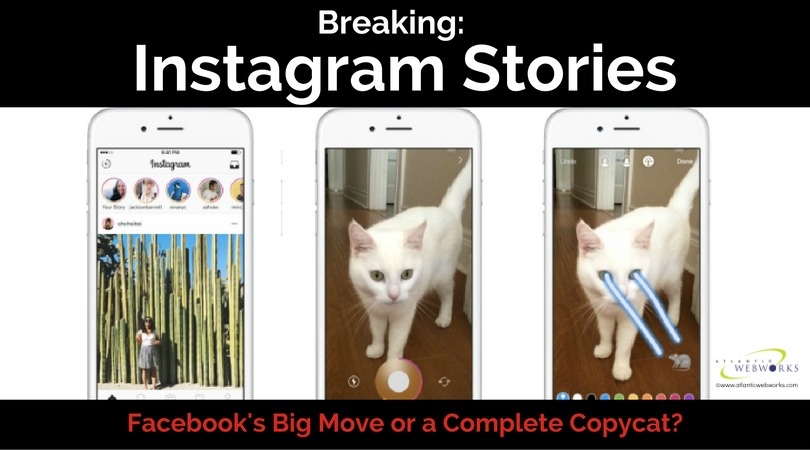 There was a lot of talk yesterday regarding Instagram's newest update that included a HUGE new feature that looked very familiar to anyone who's on Snapchat. According to their blog post, Instagram Stories will be rolling out globally over the next few weeks on iOS and Android. So, if you don't have it yet (I do), you should see it soon.

For the most part, people were not happy about this change—calling it a blatant ripoff of Snapchat, and while there is some truth to that, it's not the first time that Facebook (which owns Instagram if you're not aware) has blatantly copied one of their competitors. They did it with Twitter when they introduced the "trending topics" column as well as the 30 seconds that hashtags were searchable on Facebook. They did it with TimeHop when they gave you "On this Day." Sorry folks, that's not original; I've been seeing my social history on TimeHop for 6+ years—long before Zuck gave it to users.

Pretty much any new "feature" on Facebook is not new at all, but rather their attempt at either staying on top of the game or taking down the little(r) guy. Or both.

But why did they do it? Simple—it's numbers and demographics, and the fact that Snapchat is cleaning their clocks when it comes to popularity with the age group that they covet—the 18 to 25-year-olds. Reports in February showed that the number of Instagram users was over 500 million, and Snapchat weighed in at just shy of 200 million users; whereas, Facebook's largest demographic is 30 and over. Instagram is still extremely popular with the younger generation, and if they can get them to use Instagram the way they already do (by posting pictures) as well as incorporating the Snapchat-like feature, in the end, it helps the mothership Facebook.

Will it work? Honestly, I'm not sure, but I do think there are some positives for both marketers and users:

Like everything that changes on social media, the furor will die down soon, and before you know it, you'll be watching your friend's stories and probably starting a few of your own!

What are your thoughts on Instagram's new update?